All About Abbeyfield Houses


Who we are and what we do 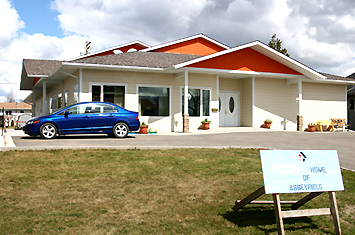 About your local Abbeyfield House


In early 2006 a group of concerned people met to pursue the possibility of building a home for senior people. After an extensive search the Abbeyfield model was chosen. The next step involved incorporation as a Society which came about on May 23, 2006. Actual construction began in late summer of 2006. Over the next two years, many volunteers, both local and provincial organizations worked together with the contractors to construct and complete the building.

The completed building has rooms for 12 residents with a central kitchen, laundry room, library and dining/living room area. Our first residents moved in by mid August 2008. Abbeyfield is not a care home. It is for people who want an independent but secure and supportive living.

In 1956 Major Richard Carr-Gomm resigned his commission with the British Army and bought a property at 50 Eugenia Road, South London, for £250. It was run down, had six rooms, no bathroom, outdoor lavatory and two cold taps. It was to provide housing for four people - the only qualification being loneliness. He was the first housekeeper and was dubbed by the press "The Scrubbing Major" (no Swiffer then).

Today in 2008 this prototype has provided a vision and the impetus for hundreds of Abbeyfield Houses operating all around the world. Worldwide there are 1100 Houses serving the needs of over 9,000 residents. A presence in 17 countries including Japan and Mexico. In Canada today there are 40 Societies, 29 Houses and ten more planned or under construction.

Abbeyfield offers a warm, family-style House and a balance between privacy and companionship, security and independence, combined with the special caring element provided by dedicated volunteers and the consistency of a single House manager.

Age and loneliness are the prime considerations for residency, together with level of health and compatibility with other residents.

Each House creates a sense of "belonging" that is truly preventative medicine. With a history of nearly five decades, our statistics show that most Abbeyfield residents take on a new lease on life. They are more fit and more inclined to live out their natural life cycle (and longer) without becoming debilitated.

First, that many elderly people everywhere suffer from loneliness and insecurity and so need care, companionship and practical support in their daily lives.

Secondly, that the elderly still have an important role to play in the lives of their families, friends and communities.

Thirdly, that within each community, individuals can actively help the elderly to have a secure and happy life by offering them a home of their own within the companionship of a small household.

ABBEYFIELD'S PURPOSE:
To assist Member Abbeyfield Societies to provide seniors, in their local communities, with a home of their own in a small household according to the Abbeyfield Pattern.

THE ABBEYFIELD PATTERN IS:
To involve local Abbeyfield volunteers in setting up and managing each house, where the residents will pay their share of the running costs.

Every household will have its own housekeeper to look after the house, to provide meals and to care generally for the residents.

The residents will have their own rooms, furnished as they wish, where both their privacy and their right to invite visitors are assured.

Make a Donation to Abbeyfield Houses: